Using VitroGel to build a 3D cell model is easy and versatile. By simply mixing the hydrogel solution with cell suspension at room temperature, the operation process can be done in 20 minutes (including a 10-15 min waiting time for hydrogel stabilization). The mechanical properties of the hydrogel can be tuned by adjusting the hydrogel concentration with VitroGel Dilution Solution. Biological functional ligands (such as  RGD, collagen, laminin, and MMP) are modified in different versions of VitroGel to closely mimics the natural extracellular matrix (ECM) environment. The VitroGel system can be “mixed and matched” with each other. Scientists can tailor create their 3D culture micro-environment by blending different VitroGel systems for different applications. Drug screening, immunofluorescence analysis, and cytotoxicity assays can perform in hydrogel directly. Cells cultured in this system can be easily harvested out with VitroGel® Cell Recovery Solution for downstream analysis or subculture.

By using the VitroGel to build in vitro 3D cell models, scientists can get full control to examine cellular responses in a more physiologically relevant context. The biomatrix microenvironment can be manipulated in several different ways:  Mechanical Strength, Functional Ligands, Degradation, and Serum/Growth Factors/Cytokine/Chemokine

Mechanical Strength
Cells cultured in 3D biomatrix are affected by the mechanical strength of the matrix structure. In VitroGel, the hydrogel strength can adjust by a simple dilution process. The typical gel strength range from 10 to 4,000 pa and the customized higher concentration hydrogel can get over 20,000 Pa. 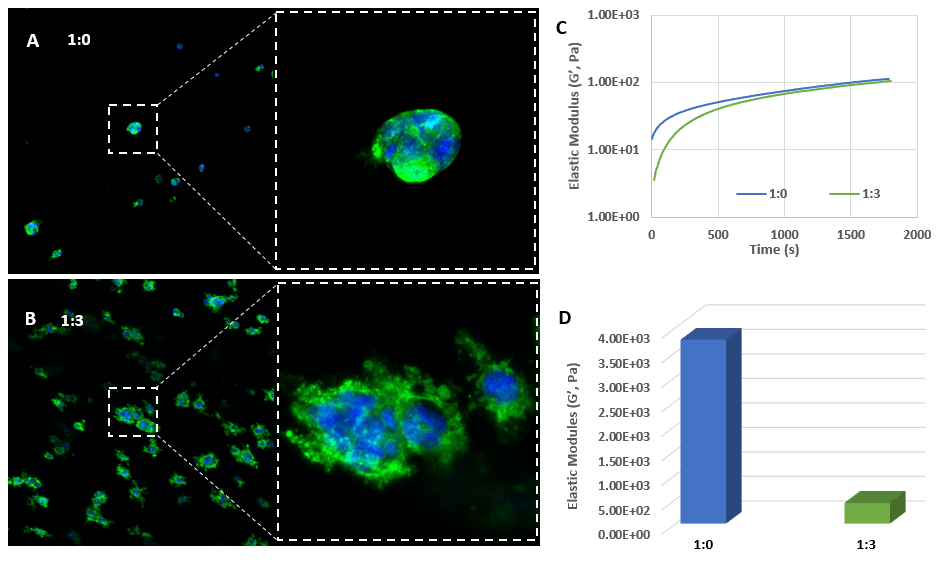 The images show the growth of PANC-1 cells that were encapsulated in 3D VitroGel matrix for 7 days. At 1:0 dilution (A), the cells perform as a spheroid morphology with a lower proliferation rate than those cultured at 1:3 dilution (B). Looking an enlarged view of the ActinGreen / NucBlue staining, in Figures A and B, reveals increasing complexity and dispersion of the ECM generated by the cell-cell contact of PANC-1 cells when maintained in a softer hydrogel (1:3 dilution).

The time sweep elastic modulus data (C) indicate the hydrogel formation after mixing with cells to maintain the homogeneous 3D cell suspension. Image D shows the different final hydrogel strengths (D) at two dilutions (3,500 -4,000 Pa for 1:0 dilution and 100 – 300 Pa for 1:3 dilution), which lead to the different cell responses in this study.

Besides considering the hydrogel with or without the adhesive binding ligands (example above), choosing the right corresponding functional ligand is also very important. The images show the growth of MCF-7 from day 1 to day 7 on VitroGel IKVAV and VitroGel COL. The collagen functional ligand can support cell proliferation and sphere formation better than the IKAVA ligand.

Degradation
Metastatic cells degrade the local ECM to control invasion and dissemination into new tissue. The MMP-modified VitroGel can be used for this study. The hydrogel can mix and match with other versions of VitroGel to study the process of MMP degradation and cell-matrix interaction for cell mobility.

Using the MMP-modified VitroGel MMP, scientists can study cell mobility by degrading the local ECM during cell proliferation and invasion. The images show that the SNB-75 cells perform a strong ECM degrading capability in VitroGel MMP.

VitroGel MMP is commonly used for “mix and match” by blending with other functional VitroGel to create a microenvironment with both bio-functional ligands and degradability.

Serum/Growth Factors/Cytokine/Chemokine
VitroGel is the xeno-free system. Scientists get full control of the microenvironment, including the serum and growth factors. These compounds can add to cell suspension before mixing with hydrogel to create an enriched hydrogel matrix or added after the hydrogel formation to feed cells.

Bone marrow cells (OP9) 3D cultured in VitroGel RGD with 2% and 10% FBS.
The xeno-free VitroGel system allows scientists to get full control of the bioactive compositions of the biomatrix. The cell suspensions in this test were prepared in a culture medium with 10% and 50% FBS. After mixing the VitroGel hydrogel solution with cell suspension at a 4:1 (v/v) ratio, the cells were encapsulated in a hydrogel matrix with 2% and 10% final FBS concentrations respectively. The images were taken 18 hours after cell seeding.

Cookie SettingsAccept All
We use cookies on our website to give you the most relevant experience by remembering your preferences and repeat visits. By clicking “Accept All”, you consent to the use of ALL the cookies. However, you may visit "Cookie Settings" to provide a controlled consent.
Manage consent