Three-dimensional (3D) tissue cultures have numerous advantages compared to traditional two-dimensional (2D) cultures [1; 5]. Minimizing exposure to hard surfaces can improve cell maturation and survival and also provide an environment, more reminiscent to the one such cell would be exposed to in vivo. Combined with specific small molecule introduction into the 3D hydrogel formulation, and incorporation of cell attachment sites such as RGD-peptides, it has recently become possible to more fully recapitulate a growing range of organ niches in vitro, which has benefited drug discovery and functional tissue engineering [2]. While mouse ECM-derived hydrogel options such as Matrigel® and Geltrex® have been the workhorse of the 3D tissue field for a while now, it is important to note that they are isolated from cancer cell cultures and are not chemically defined, or xeno-free; all major challenges for translational work in regenerative medicine and human 3D tissue modeling [3].

Seeding cells on top of a shallow hydrogel-coated plate surface is an attractive compromise between full 3D cultures and traditional 2D cultures, as it allows for cells to avoid exposure to hard surfaces and can promote cell survival and maturation, while still being able to maintain a high degree of reproducibility and scalability. These advantages are especially beneficial to neural cultures, as such cells are on average more fragile and require a tissue niche that is usually more complex and with tighter regulatory demands in order to recapitulate proper neural function and maturation [4]. Here we compare the morphology, self-organization, and survival of a widely used immortalized neuron cell type grown on top of a thick hydrogel coating (shallow 3D tissue culture) in a common maturation assay.


B35 rat neuroblast immortalized cells (ATCC CRL-2754) were used to model long-term neural maturation and survival in vitro. Cells were maintained an actively dividing and undifferentiated state in DMEM media supplemented with 10% FBS and pen/strep, with full media changes twice a week, if necessary. When the cultures reach ~80% confluence, they are passaged at 1:10 ratio using Trypsin-EDTA incubation for 5 minutes at room temperature. On average, cultures maintained in this way can be passaged every 4 days and expanded for over 20 passages with no loss of dividing potential, or degradation of their mature state upon serum withdrawal.

B35 neurons were differentiated on 2D thick hydrogel coating (shallow 3D encapsulated) cultures via serum withdrawal per the ATCC guidelines. Briefly, to achieve a functional neural state, B35 cells are maintained in serum-free DMEM media, where they become post-mitotic and synaptically active in ~5 days.

For 2D thick hydrogel coating (shallow 3D cultures), undifferentiated B35 cells were added on top of either VitroGel 3D (TWG001; TheWell Bioscience. 4:1 ratio of hydrogel to DMEM) or in Matrigel (80% Matrigel, 20% in DMEM). Both hydrogels were allowed to gel at 37°C for 20 minutes, then were perfused with B35 differentiation media (DMEM+pen/strep) for up to 21 days.

Immediately after seeding cells on hydrogel, FBS was withdrawn from the culture to induce differentiation. Cells were subsequently fed twice a week with full serum-free media change each time for three weeks.

To characterize culture state, morphology, and survival, cells were fixed on day 3, day 7, day 9, and, day 21 and stained for the neuron-specific marker Beta-III-Tubulin (T5076; Sigma-Aldrich) to look at cell attachment to the surface, morphology, and cell numbers. Cells were counterstained with donkey anti-mouse AlexaFluor647 (ThermoFisher) and DAPI (ThermoFisher) nuclear stain.

Differentiating B35 neuron cultures (~10K cells/construct) were evaluated over a time course of 21 days for cell morphology consistent with typical neuron projections, cell survival, and self-organization within the thick hydrogel bed, either VitroGel 3D, or Matrigel, onto which they were seeded. We used the neuron-specific marker Beta-III-Tubulin to evaluate the critical morphological changes within the cultures.

Cells spread out and form neural-like networks as early as day 3 post-differentiation, with comparable efficacy between VitroGel 3D and Matrigel, based on cell survival, culture spreading and morphological analysis reached between days 7 and 9. On Matrigel mats, cell culture health and viability drops off sharply once day 9 has passed, with most cells detaching and neurites retracting by day 14 and the vast majority of cells gone by day 21. If grown onto VitroGel 3D mats, differentiated B35 neurons have a tendency to self-organize into 3D clusters very early on (Day 7), assuming a mixed 2D/3D cell culture for the first two weeks of the time course. By Day 21, these cells have migrated into self-assembled 3D clusters, embedded into the thick hydrogel matrix, with very few cells between the clusters, but without any significant cell death (Figure 1).

Besides the 2D thick gel coating method, the B35 neurons can be differentiated and maintained on 2D thin gel coating method as well.  For 2D thin gel coating cultures, tissue-culture treated plates were coated with either VitroGel 3D-RGD (TWG002; TheWell Bioscience. 1:20 dilution) mixed with DMEM for two hours at room temperature, or with Matrigel (1:100 dilution from stock in DMEM; ~80-120µg/ml) also for two hours at room temperature. Tracking cell adhesion to the surface over the course of two weeks showed that cells plated on VitroGel 3D-RGD were able to adhere well and spread out in a typical neural morphology following withdrawal of fetal bovine serum (FBS), which triggers differentiation into post-mitotic neurons for the B35 line. Control plating was also done on Matrigel over the same time period (Figure 2). Overall, VitroGel 3D-RGD allows cell adhesion comparable to Matrigel, the cultures were able to be differentiated in a similar manner, and neurite extensions were observed in both cases.  VitroGel could provide surface coatings that are xeno-free and chemically defined, which would allow for enhanced control over culture conditions and lower confounding factors in complex experiments. 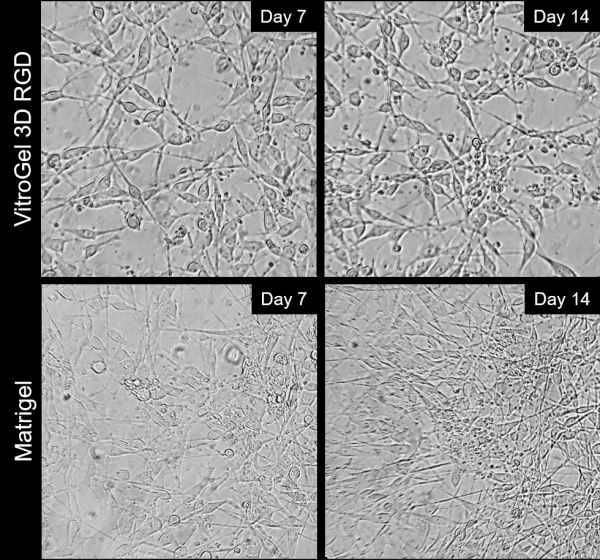 Figure 2: Comparison of long-term neuronal cultures seeded onto thin 2D hydrogel coatings. Rat immortalized B35 cells were plated on either VitroGel 3D-RGD or Matrigel, differentiated via serum withdrawal and maintained for two weeks to track neurite extension and cell attachment.

Based on our results, we surmise that VitroGel 3D and Matrigel are both capable of supporting cell differentiation over a relatively short period of time, where the bulk of current neural assays that use B35 cells are performed. Matrigel may have a slight edge in this particular culture, due to the fact that it has growth factors and proliferative/protective soluble molecules in the matrix, due to its derivation, but the trend appears to reverse later in the long-term maintenance, with differentiated B35 neurons detaching and floating off the hydrogel matt after day 14 in vitro. In our study, VitroGel shows comparable, or better performance, to the Matrigel control to support neural maturation and survival in long term.

This is not unexpected, as Matrigel and indeed 3D cultures, in general, have been reported to provide cell preservative, proliferative, and maturation advantages over traditional 2D culture [5].
VitroGel 3D in our study was that it is a hydrogel that is fully chemically defined and xeno-free, without significant loss of cell viability. This compares favorably to Matrigel, which is not xeno-free, or chemically defined, so as such could have unintended side effects if used either as thick coating support, or a full 3D tissue matrix with sensitive cells like human-derived neurons, cardiomyocytes, etc.

Due to the nature of its formulation, VitroGel does not have inherent pre-existing growth factors. The system can be further modified by seeding with soluble factors to recapitulate the desired niche, and that can be done in a controlled, reproducible, and defined manner, which lends itself well to be used for scaffolds in xeno-free models of human disease and organ mimic development. 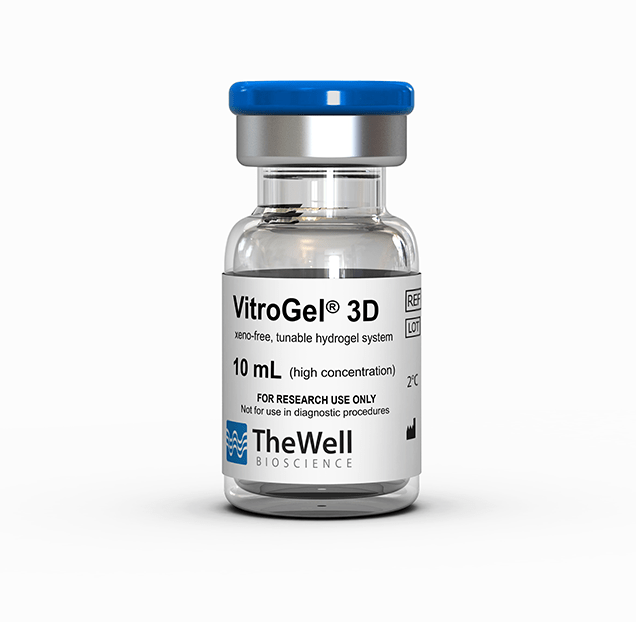 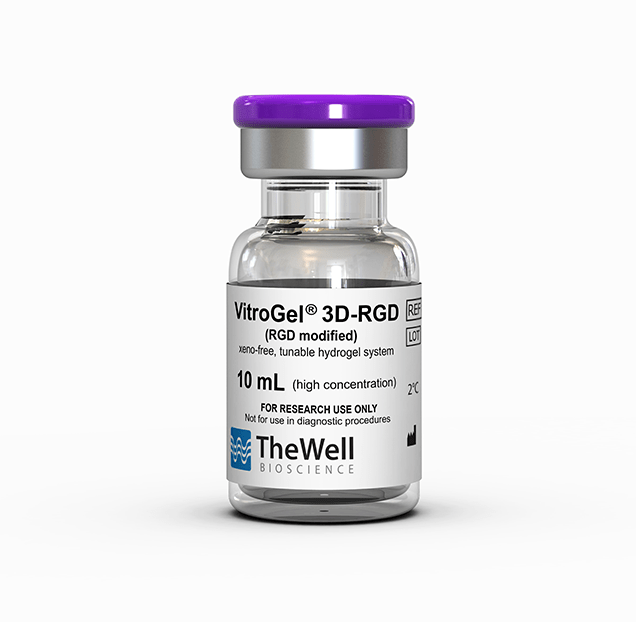 Please fill the form below to download the
application note