3D culture has become the standard for studying complex systems, such as the tumor microenvironment (TME), in an in vitro setting. These systems allow for insight into the cell-cell interactions and communications that occur in vivo. The use of 3D matrices mimics the complex TME (2) and is even beginning to mimic metastases (3), by providing the components of the extracellular matrix (ECM) and enhancing the biological relevance of these in vitro models (1, 2). Traditionally, 3D culture systems have been established in Matrigel®, which changed the face of in vitro study of cancer allowing for proper cell differentiation and organization into 3D spheroids. Despite the timely and innovative development of the Matrigel system, there are multiple complications that have been encountered over the years (1, 2). Among these are difficulty in reproducibility from batch to batch, as the ECM components of the Matrigel® may differ, difficulty in controlling the temperature of the experiment, and presence of growth factors or proteins influencing the study. With a more reproducible system, it would be possible to expand the complexity of the system and incorporate multiple cell types revealing information on cell-cell interactions/signals (4). This enhanced insight into a TME-like system will allow researchers to understand how to inhibit or even reverse malignant phenotypes of aggressive cancers (2). Therefore, via this system, there is an answer to the need for the development of a reproducible, animal-origin-free 3D system for the study of the TME.

The VitroGel® 3D system has been used for sustained culturing of multiple cell lines (2), including a recent study with PANC-1. One of the largest challenges in developing novel treatments for pancreatic cancer is characterized by a high rate of response to treatments in 2D culture but ultimate failure in the clinic. Recent work revealed an in vivo-like TME represented in 3D sphere formation with the PANC-1 model, which elucidated significant alterations in multiple matrix proteins, cell metabolism, and responsiveness to drug treatment when comparing 2D to 3D models (5). Taken together with our understanding of the complexity of the TME, 3D models are the ideal option for comprehensive in vitro drug assessment in aggressive and challenging models such as PANC-1. In the study presented here, the benefits of the VitroGel system allowed for homogeneous distribution and sphere formation without any of the widely accepted caveats of Matrigel or traditional hydrogel systems, such as poor scaffold structure, unwanted proteins/growth factors, undesirable pH or temperature of pre-gel solution, complex operating steps, and difficult downstream analysis (1). VitroGel 3D provides a faster, easier and more versatile solution for 3D cell culture and beyond. VitroGel 3D is a room-temperature stable, animal-origin-free, tunable hydrogel system that closely mimics the ECM allowing cells to grow as they would in the body. Set-up of this 3D cell culture system only takes 20 minutes, including a 10-15 minute wait time in which the hydrogel is activated and begins to polymerize with the addition of calcium or sodium-containing cell culture medium. The versatility of the VitroGel 3D system allows for 2D and 3D cell culture, safe in vivo use, and ease of imaging in vitro with the transparent and permeable nature of the system. Further, cells are easily collected from the VitroGel 3D system via centrifugation and pipetting, eliminating the need to use degrading enzymes on the cells.

In order to assess the appropriate concentration of hydrogel to use in culturing of PANC-1 cells, VitroGel 3D-RGD hydrogel (TWG002, TheWell Bioscience) was prepared in three ratios with 0.5X PBS solution at 1:0, 1:1, or 1:3 ratios (v:v). The diluted hydrogel solution was then mixed at a 4:1 (hydrogel:cell) ratio with the PANC-1 cell suspension (seeding density of 5 x 105 cells / mL in DMEM media with 10% FBS + 1x pen-strep). 250µL of the hydrogel-cell mixture was added to each well of a 24-well plate and allowed to stabilize at room temperature for 20 minutes. Following the solidification step, 250µL of complete cell culture medium was added to the top of the hydrogel. A partial medium change method was used to prevent disturbing the hydrogel structure: On day 2, rather than removing the cover medium, an additional 200 µL of complete cell culture medium was added to the top medium of the hydrogel, and cells were allowed to culture for additional 24 to 48 hours. After this incubation period, 60-70% of the media on top of the hydrogel should be changed every other day.

PANC-1 cells were cultured in increasing dilutions of hydrogel solution with 0.5X PBS at concentrations of 1:0, 1:1, and 1:3. While at day 1 (Figure 1, Day 1) the 3D cell culture showed no difference between ratios; simply cells were able to distribute homogeneously within the hydrogel in each condition (Figure 1). When cells were maintained until day 7 significant differences were seen based on the concentration of the hydrogel (Figure 1, Day 7). Individual cells formed colonies in each condition, aggregated in each condition, however, the 1:1 and 1:3 dilution ratios of hydrogel to PBS allowed for more rapid division and expansion of the single cells, developing larger 3D colonies, as seen in Figure 1 where the blue nuclei are more numerous than in the other two conditions.

Another critical component of 3D culture systems comes from the development of an ECM which can recapitulate what is seen in vivo. Looking at an enlarged view of the ActinGreen / NucBlue staining, in Figure 2, reveals increasing complexity and dispersion of the ECM generated by the cell-cell contact of PANC-1 cells when maintained in VitroGel 3D-RGD hydrogel. These results indicate that the growth rate and complexity of PANC-1 3D spheres in the 1:3 diluted hydrogel are higher than in the 1:0 and 1:1 hydrogel dilutions (Figure 2 & video below). 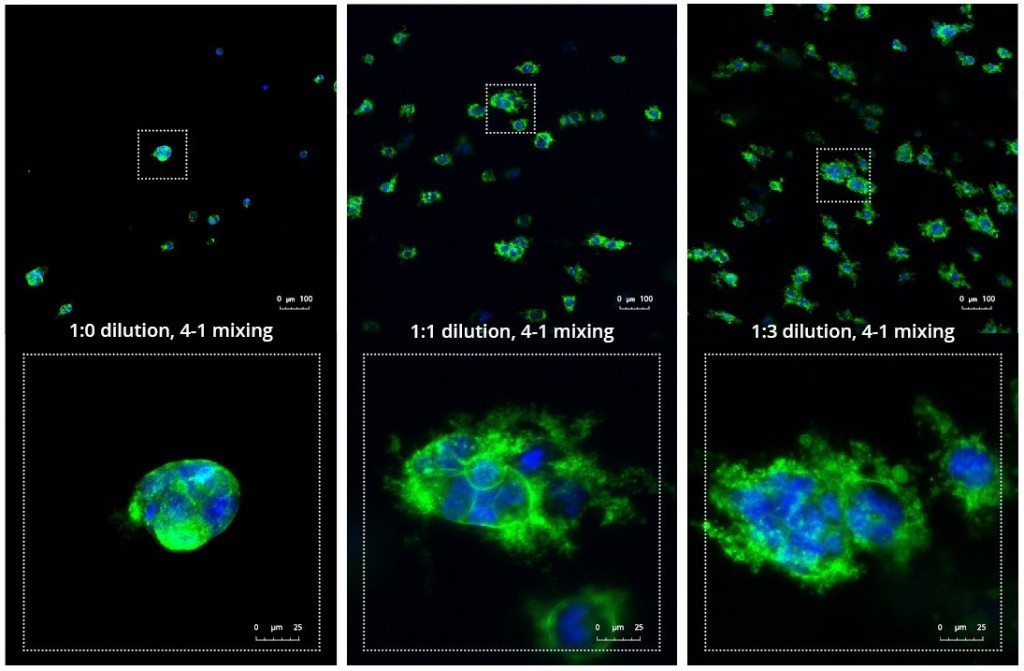 A concern of growing 3D spheres comes from the notion that the center of the sphere may become necrotic (6). In this study, spheres were assessed with a live/dead assay. This assessment revealed no significant death in each of the three hydrogel dilutions (Figure 3).

The VitroGel 3D-RGD system is a convenient, time-effective, and inexpensive system that allows for an accurate and reproducible study of the morphologies and behaviors of cells grown in 3D systems without the concern of temperature sensitivity or additional biological ingredients. The results of assessing the VitroGel 3D-RGD system with PANC-1 cells revealed that, for this cell type, that dilution of the hydrogel with 0.5X PBS yielded more robust PANC-1 spheres when examining the size of the clusters and actin localization. These promising results are the first step in validating a system that can now be exponentially expanded upon drug screening studies and to inform the clinic and may provide a promising step toward the use of patient cells in vitro with 3D assays to understand how a specific disease may respond to treatment. 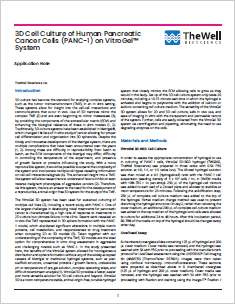 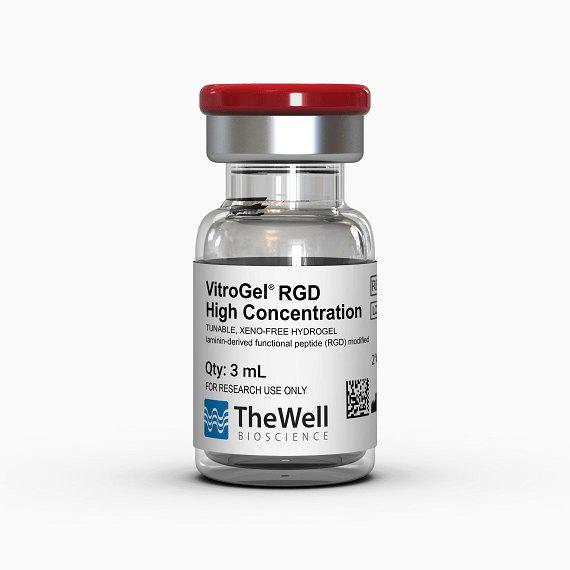 Please fill the form below to download the application note